(AnaLOGICAL, Rather Than Verbal, And Subject To The Addition Of More Analog Or Funnier Material As It May Be Found)

This one, originally told to me by my sister, doesn't work in print, so please listen to my recording of it by clicking here. I've also told it in Latin, and tailored it to such situations I've found myself in as a library circulation desk or a cinema concession stand....

A very determined worm trying to crawl over a razor blade.

A "droodle" first shown to me by my father. It makes me think of the rant in Apocalypse Now about seeing a slug crawling over a straight razor.

This one is a bit off-color, but expresses an important point, without, I hope, insulting those of certain profession. I have rewritten it slightly to avoid gender-based preconceptions.

One person walks up to another at a social occasion and asks bluntly, "Will you sleep with me for a million dollars?" Studying the inquirer, and realizing he or she is serious, the propositioned one says, "All right." "Then would you sleep with me for five dollars?" asks the first person. "What do you think I am?" demands the second, outraged. "We already know what you are," says the first person, "What we're negotiating now is the price."

This expresses the crucial analog idea that nothing is, or isn't, something else; what matters is TO WHAT EXTENT and IN WHAT WAY something behaves like something else. Also, the idea that in a world without absolutes, anything is negotiable.

This one is even racier, but again, important. To make it gender-neutral would be too cumbersome, so I have left it as I first heard it, spoken by Robert Duvall in the film Colors.

Two bulls, one young and frisky, the other old, experienced, and deliberate, are standing on top of a hill, looking down at a field full of cows. The young one says to the older, "Hey, why don't we run down this hill and [have sex with] a couple of those cows!" The older one simply says, "No, let's walk down the hill, and [have sex with] them all."

Satisfaction, "enoughness", would be an absolute. So it doesn't exist. We can always want more, want things to be better. We tend to assume there are certain parameters within which we have to limit our dreams, but our dreams could then be to change those parameters.

My high school math teacher would make the scientist in this joke Italian and adopt a caricatured accent, but that is more appropriate for someone named Anthony Russo to do than one named Michael Stoler, so I'll omit references to ethnicity as unnecessary. And while we're being sensitive, PETA people, despite its subject matter, no animals were harmed in the making of this joke.

A scientist is doing an experiment with a frog; he puts the amphibian on a starting mark, and yells "Jump!" as loud as he can. The frog jumps, and in his notebook the scientist scribbles, "Frog, with all legs, 8 meters." He then cuts off one of the frog's legs, replaces the frog on the starting line, and shouts "Jump!" Again it goes, but not as far; the scientist writes, "Frog, 3 legs, 4 meters." He cuts off another leg, and again puts the poor frog on the line, and again shouts "Jump!", and the frog goes yet again. "Frog, 2 legs, 2 meters," writes the scientist. He finally cuts off the last leg, and puts the bleeding but still breathing frog on the line. "Jump!" he yells. The frog does not move. "JUMP!" he yells. The frog is immobile. "JUMP!!!" he screams, at the top of his lungs, and still the animal does not budge. "Frog, 0 legs," the scientist writes in his notebook, "Becomes deaf."

It can be very hard to tell what is cause, what correlation....

This joke I got from Mrs. Paula Jones, NOT THE ONE WHO SUED THE PRESIDENT, OK? SHE NEVER HEARD THE END OF THAT ONE!! Femina magna sapientia (there should be macrons over the last a in the second and third words), she was my colleague in Latin teaching at the school in Virginia where I worked for a few years, and stood behind me and kept me organized enough for me to pull off one of the few achievements producing satisfaction and acceptance of me both in myself and others, the 1992 Certamen (or interscholastic classics-oriented quiz bowl.) Her joke:

Okay, so she didn't really tell it in Latin, though in some ways it's more analog that way than in English. Still, for the rest of us:

What do you call a boomerang that doesn't come back? Stick.

Now that I think of it, there's a whole other interpretation to this joke that had never come to my mind, but it's more phonological than, I guess, phenomenological, and so for once, don't be looking for puns as you read me. 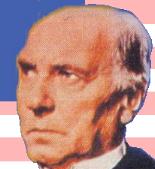 This joke was told to me by Col. Robert A. Lynch, U.S.A., Ret., (and he was a much better Army colonel than that other Robert) who, after service in several World and other Wars and on the faculty of the United States Military Academy, was also my fellow teacher. Definitely not ot a Kentucky colonel (only in small part because we were in neighboring Virginia), but truly a distinguished elder statesman who had earned his country's honor, with gravitas and dignitas and experientia rei militariae which the Romans would have loved and a Latin teacher could hold up as examples, with the patriarchal air of a late-in-life Sir Ralph Richardson (especially as the Supreme Being in Time Bandits) or Sir John Gielgud (had he lived in Britain, he certainly would have been a knight), with a great knowledge of both the history that had occurred during his lifetime, in which he had had a certain role, and that before, and yet a terrific sense of humor. Though from the perspective of his age, I, just out of college, was basically in the same cohort as the high school students we taught, he always treated me with great deference and many kind words, and his grandfatherly presence, walking slowly, and with his great white head slightly stooped, down the halls with his three-piece suit, watch chain, and cane, mumbling, "I don't want to do to school, I don't want to grow up." Once, before asking him about a pedagogic matter, I said, "I need your advice," and without missing a beat he roared back, "Marry the girl immediately!" He would be about 78 today, and there is every reason to hope he is still with us, but whether he is or not, it is by this story that he told me, the combination of historical-political erudition and wit, that I remember him, and I offer it now, for your enjoyment, as the Colonel Lynch Memorial Joke.

In or about 1991, while they were both still securely in office before being rather embarassingly removed from it, American President George Bush (the Elder) and his Soviet counterpart Mikhail Gorbachev were talking. Bush had recently conducted fruitful negotiations with Soviet Foreign Minister Eduard Shevardnadze, and was very impressed with his abilities. How, he asked Gorbachev, had the Soviet leader found and selected him for the job?

"Well, I'll tell you," responded Gorbachev, "I posed him a conundrum to solve. I asked, 'Who is your father's son, but isn't your brother?' And he immediately answered, 'I am, of course', and I said, 'Great, you get to be Foreign Minister !'"

Now Bush was even more impressed, so he decided to try a little experiment. He called to him Vice-President Dan Quayle. "Dan," he asked, "Who is your father's son, but isn't your brother?" Quayle paused, deep in thought, or as deeply as he could get. Finally, he blurted out, "I don't know.....but I'll find out," and dashed off before the President could say another word. He went running desperately around the White House, until he ran into then Secretary of State James Baker. "Jim, Jim, thank God," he panted in relief, "I need your help. Tell me, who is your father's son, but isn't your brother?" The well-connected Baker had no trouble with this one; "I am," he replied without hesitation, and almost before he had finished, Quayle had run off, thanking him profusely.

Quayle soon was back in the Oval Office. "Mr. President! George! I've got the answer!" he announced proudly. "It's Jim Baker!" The President adopted the pained, resigned, disappointed look he so often found himself wearing when dealing with his Number 2. "No, NO, you idiot!" he scowled. "It's Eduard Shevardnadze!" 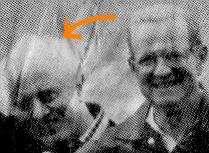 If I had warned you not to laugh before the very end it would have given it away.....this joke also makes me think of another teacher I really admired, Dr. Guenther Teschauer, kotoryi, while not Mr. Russo, mnye prepodoval rooskii yazyk, and resembled Shevardnadze somewhat physically, which is sort of appropriate but sort of not since my magister was German and the Minister is Georgian. Also, the story references someone I always admired and some others I always enjoyed making fun of. I'll leave it to you to guess who is who.

This one I just heard offered by a ten-year old kid as part of his contribution to the annual "Jokes Show" on the "Prairie Home Companion", which I usually find to be, as its host said about Fargo, a movie I thoroughly enjoyed,to be like driving through North Dakota at about ten miles an hour. The kid's delivery, or the fact that he was a kid, only added to the pleasure.

For another important document in the study of jokes, click here.